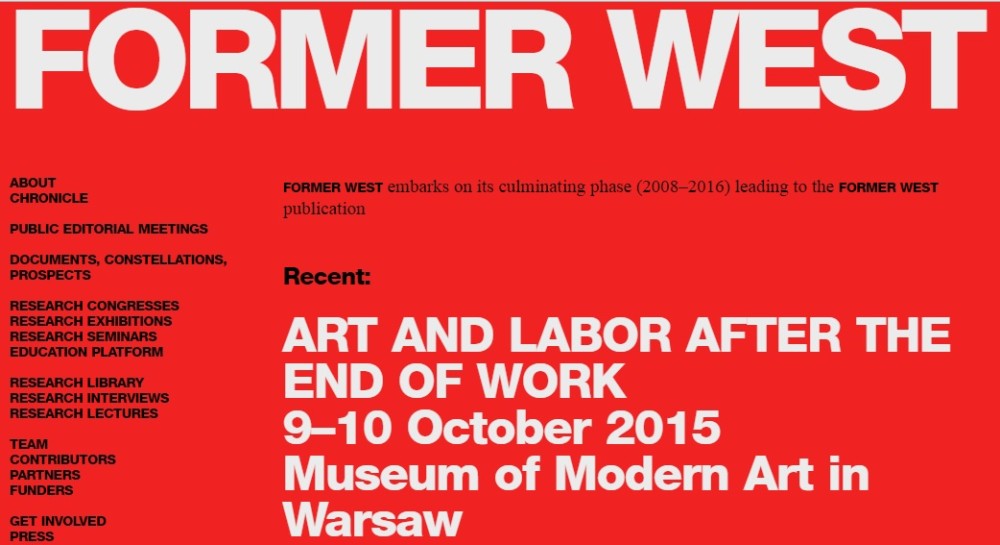 This application seeks support for the Culminating Phase (1.9.2014–31.12.2016) of FORMER WEST (FW), a long-term, collaborative, pan-European, transdisciplinary project. Initiated in 2008, and realized through intensive European cooperation—which has assured sustainability of creative practices, knowledges, and network throughout the project’s successive phases—FW aims at developing a critical understanding of the legacy of the radical transnational citizen resistance to power in 1989, in order to both imaginatively reevaluate the present and speculate about (global) futures. The creative imaginary “Former West” functions as a catalyst for developing new works, ideas, and activities that reflect upon the impact of the end of the Cold War on the West itself, and rethink the West’s place in the conception of one world. The project innovatively deliberates on the changing relationship between artistic, intellectual, and other creative practices and the ongoing political, social, and economic transformations taking place in Europe. Particular attention is paid to the notion of the audience, as it is through audiences and their changing needs that one can chart—and propositionally respond to—the shifting paradigms across art and society. The final, Culminating Phase of the project will be carried out by artists, thinkers, activists, creative practitioners, art and educational institutions, and various audiences, so as to arrive at articulations of both the conclusions of the project and proposals for a future European creative agenda. Key facets will include Exhibitions, Research, Public Educational Programs and (in)formal radical pedagogies in the field of creativity, Conferences, Public Editorial Meetings, Network Meetings, and a major concluding Publication. Constitutive methods include providing skills and competences; innovative approaches to audience development; mobility of works, ideas, and creative practitioners; and usage of digital technologies.”